Free worldwide shipping on all orders!

Free worldwide shipping on all orders!

Adamantium might be a natural for shredding meat, but one can’t help wondering if Wolverine has ever considered using his claws to shred cooked meat, particularly, giant butts of pork, slow grilled and smoky on the BBQ. You might as well slather it with sauce to finish! Perhaps in retirement, he’ll put those retractable, super sharp claws to even better use running a food truck. In the meantime, however, you can simulate the technique of pulling and shredding your own grilled meats with a pair of your very own, Wolverine-style meat claws!

Unfortunately, these Wolverine Meat Shredders aren’t plated with Adamantium, which means they probably aren’t indestructable. But as long as you’re using them for their intended purpose; chopping, cutting and shredding meats, then these 5″ Claws should hold up when called upon. They also make your mundane kitchen tasks feel just a little more badass! 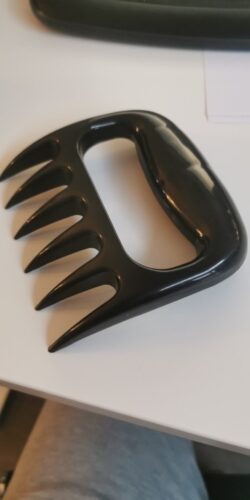